Page being translated from English to Chinese. Do you speak Chinese? Help us to translate it by sending us pull requests!

Selenium Grid 4 is a ground-up rewrite from previous versions. In addition to a comprehensive set of improvements to performance and standards compliance, the different functions of the grid were broken out to reflect a more modern age of computing and software development. Purpose-build for containerization and cloud-distributed scalability, Selenium Grid 4 is a wholly new solution for the modern era. 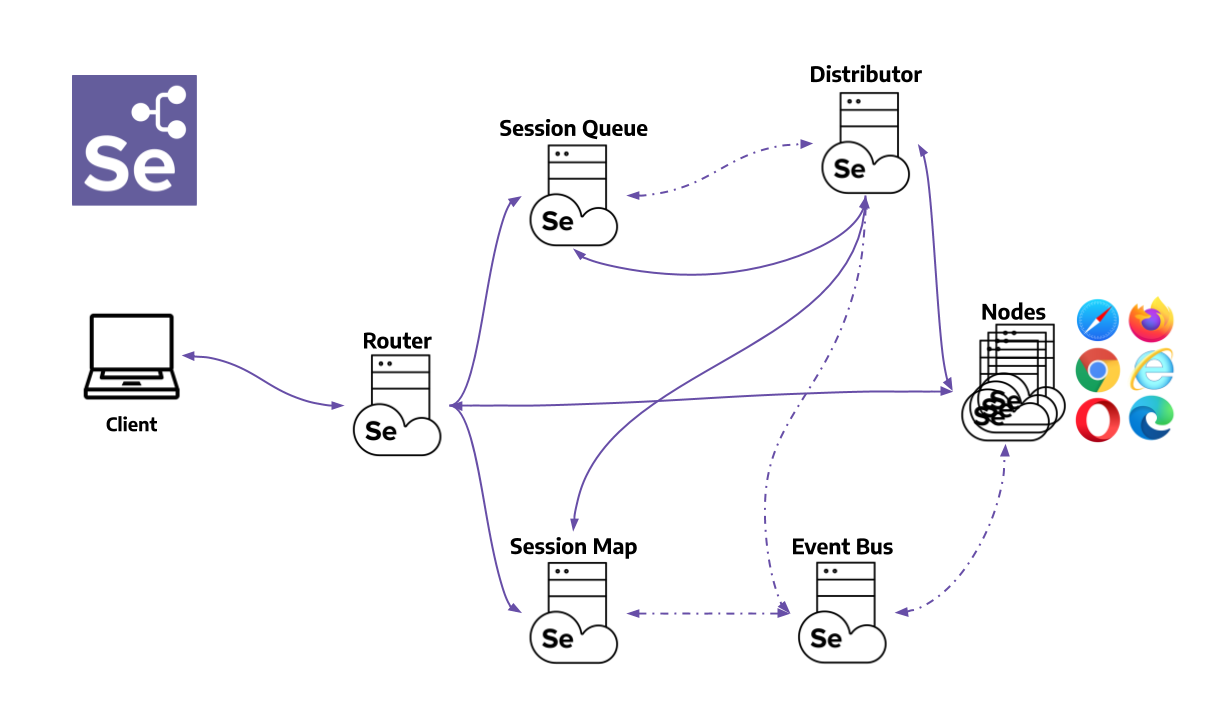 The Router is the entry point of the Grid, receiving all external requests, and forwards them to the correct component.

If the Router receives a new session request, it will be forwarded to the New Session Queue.

If the request belongs to an existing session, the Router will query the Session Map to get the Node ID where the session is running, and then the request will be forwarded directly to the Node.

The Distributor has two main responsibilities:

Register and keep track of all Nodes and their capabilities

The New Session Queue holds all the new session requests in a FIFO order. It has configurable parameters for setting the request timeout and request retry interval (how often the timeout will be checked).

After a session is created successfully, the Distributor sends the session information to the New Session Queue, which then gets sent back to the Router, and finally to the client.

A Grid can contain multiple Nodes. Each Node manages the slots for the available browsers of the machine where it is running.

The Node registers itself to the Distributor through the Event Bus, and its configuration is sent as part of the registration message.

By default, the Node auto-registers all browser drivers available on the path of the machine where it runs. It also creates one slot per available CPU for Chromium based browsers and Firefox. For Safari, only one slot is created. Through a specific configuration, it can run sessions in Docker containers or relay commands.

A Node only executes the received commands, it does not evaluate, make judgments, or control anything other than the flow of commands and responses. The machines where the Node is running does not need to have the same operating system as the other components. For example, A Windows Node might have the capability of offering IE Mode on Edge as a browser option, whereas this would not be possible on Linux or Mac, and a Grid can have multiple Nodes configured with Windows, Mac, or Linux.

The Event Bus serves as a communication path between the Nodes, Distributor, New Session Queue, and Session Map. The Grid does most of its internal communication through messages, avoiding expensive HTTP calls. When starting the Grid in its fully distributed mode, the Event Bus is the first component that should be started.

Running your own Grid

Looking forward to using all these components and run your own Grid? Head to the “Getting Started” section to understand how to put all these pieces together.
最后修改 August 29, 2022: Updating and correcting Grid Components (2132ec7302a)

Want to support the Selenium project? Learn more or view the full list of sponsors.